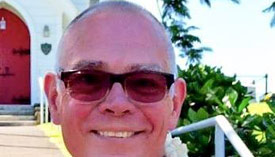 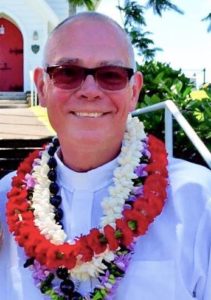 It’s official!  Trinity Episcopal Church by-the-Sea has a Permanent Part-time Vicar!  Reverend Bruce DeGooyer has accepted the position and will start on July 1, 2016.

Thanks to the work started by Bishop Fitzpatrick in recruiting Fr Bruce and Fr Austin’s continued diligence, we have resolved the issue of having a Permanent Vicar.  We are so grateful to them and to God for his blessing on Trinity.

Fr. Bruce was ordained a Vocational Deacon in 2004 in Illinois. After retiring from his secular work in Human Resources with Country Financial, he was ordained a Priest on October 4th 2012. After being named Curate at St. Matthew’s Church in Bloomington IL, he additionally served as Supply Clergy through the Diocese.

In 2014 he served as Supply for St. Augustine’s Episcopal Church in Kapa’au on the Big Island and then was called to return as Interim there in 2015 so he already has some familiarity with island living and culture. Many of you were fortunate enough to “meet and greet” Fr. Bruce and Sylvia when they visited Trinity at the end of April.

Fr. Bruce was born in Kansas and, being born into a military family, has lived in a number of different states. He actually went to middle school in Okinawa before his family finally settled in Lakewood, WA.
Sylvia was born in Tacoma, WA, and raised in the south Seattle area. They met at Washington State University, as undergraduates and were married in 1976. This October 9 will be their 40th anniversary!

The DeGooyers have two children. Their son David and his wife Stefannie live in Chicago, IL and their daughter Ryan Elisabeth and their grandson Xander live in Port Costa, CA. Xander is 6, will be starting first grade this fall, enjoys boating and fishing, and (of course) is a delight.

Fr. Bruce and Sylvia both enjoy reading, biking, hiking, snorkeling, and being outdoors. Once they are established on-island, they also plan to join a fitness club. Sylvia hopes to volunteer in nature conservation efforts. They both love Hawaiian history, culture, music, exploring the islands, and plan to take Hawaiian language class and hula! 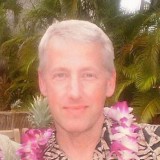 Trinity Episcopal Church by-the-Sea is all-inclusive and proudly listed on gaychurch.org as one of several Maui churches welcoming our LGBTQ ohana.